Blog: Is the COVID vaccine for me?

I have to be honest and say that when I first heard the COVID vaccine was ready and about to be rolled out, I was terrified.

As a Care Worker at Winehala Court, one of Housing 21’s Extra Care schemes in the West Midlands, I knew I would be high priority on the list of people who would be offered the new immunisation and I hadn’t received a lot of information on it and hadn’t done my own research on it yet either.

There was a lot of talk about allergies when the vaccine first started being administered and as I have skin allergies, I wondered whether I would have a reaction as a result of being vaccinated. I am a Black African woman and so some of my hesitations also came from wondering whether the vaccine would be safe for people of my race and ethnicity.

At this point, I made my mind up that I was not going to have the vaccine. I was adamant that having the vaccine would not be good for me.

One day, when my work colleagues were discussing it, I told myself I was not having it myself and so there wasn’t any point in getting involved in the conversation.

"After my colleagues had started to have their first vaccine, I noticed that no one had any extreme side effects and they were not negatively affected by it."

I had made this choice, but every day I saw the number of people dying from COVID-19 and this scared me. After my colleagues had started to have their first vaccine, I noticed that no one had any extreme side effects and they were not negatively affected by it. At this point, I started to get more interested in the vaccine and began to research it more. I spoke to my manager who had been for her vaccine and asked if there were any ethnic minorities having the vaccination. She told me that there were and that the nurse who gave her vaccination was of ethnic minority and she had already had her vaccination and had no effects from it.

"I worried for nothing. I had no reactions at all..."

I realised that maybe I was worrying for nothing and as I wanted to be protected from COVID-19, I decided to have the vaccination. My manager booked me my appointment, I went and had it done and all has been well since. I worried for nothing. I had no reactions at all, thank God! 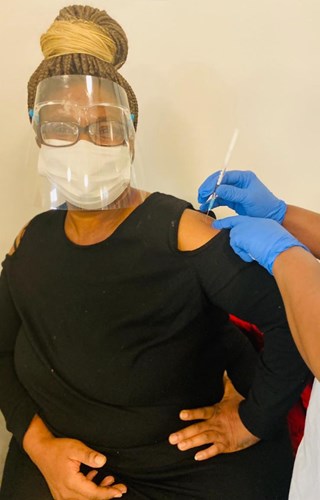 Because of this, I wanted to share my story with others who are worried about having the vaccination to give them reassurance that there is light at the end of the tunnel. I can now continue to care for our residents at Winehala Court and feel more safe doing so.