MPs across the country have been paying a visit to local Housing 21 schemes to find out more about the benefits of Retirement Living. 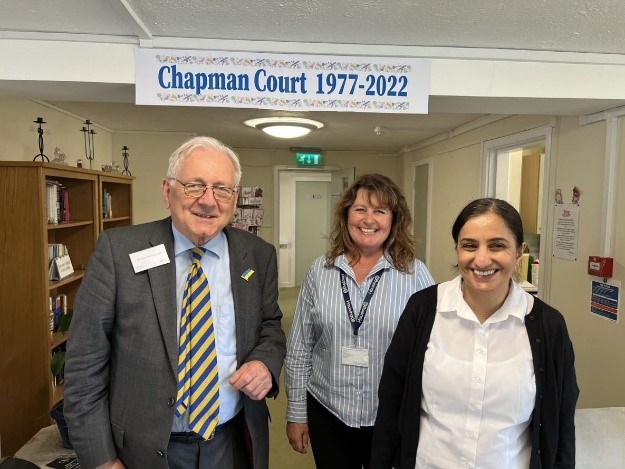 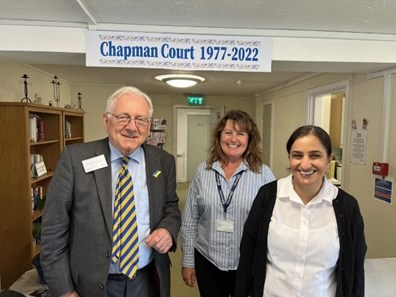 Sir Peter Bottomley, MP for Worthing West, joined residents for tea and cake to celebrate the 45th anniversary of Chapman Court, which welcomed its first residents in 1977.

Nicollette Baldwin, Operations Manager at Housing 21, gave a tour around the scheme and said: “The visit went very well and there was a good-sized group of residents in the lounge to meet with Sir Bottomley over tea and cake. It was a very pleasant experience and he even said he would love to come back and visit again soon.”

Sir Peter Bottomley echoed Ms Baldwin’s positivity, adding: “The team and residents at Chapman Court offered a warm welcome. It was a delight to have exchanges on current affairs with people whose lives have covered the momentous decades during the Queen’s reign. I congratulate Housing 21 for carrying on the tradition of the Royal British Legion in adding life to people’s years in a caring, supportive community.” 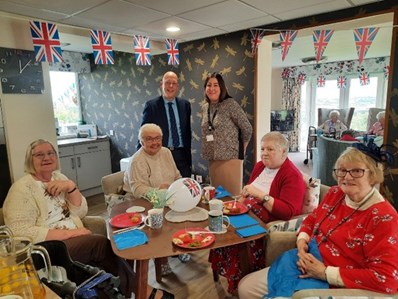 Pictured: Mark Eastwood MP and Jessica Ettridge, Court Manager, with some of the residents at Charlesworth Court

Elsewhere in the market town of Dewsbury, Charlesworth Court welcomed Mark Eastwood, MP for Dewsbury, with a continental style brunch to celebrate the Queen’s Platinum Jubilee.

Jessica Ettridge Court Manager at the scheme, commented: “We had a lovely celebration with our very special guest Mark Eastwood MP. For entertainment we watched the Queen’s Coronation and the Diamond Jubilee Concert from 2012.”

Mr Eastwood said “I was delighted to visit Charlesworth Court and join the residents and staff for their Jubilee celebrations. Housing 21 is a vital service, providing accommodation for older people and I will be continuing to support this important sector as MP for Dewsbury.” 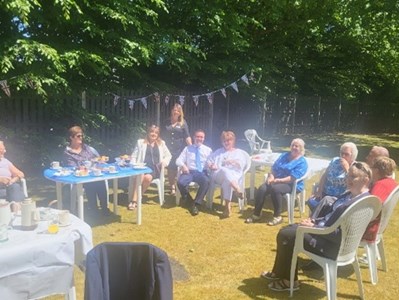 Pictured: Stephen McPartland MP and Maria Free, Court Manager, with some of the residents in the McGovern Court garden

The Jubilee celebrations continued with residents at McGovern Court in Stevenage, where Stephen McPartland, MP for Stevenage, was invited to join them in commemorating the occasion with a tea party in the scheme’s gardens.

Mr McPartland said: “It was a huge pleasure to meet some of the residents and staff at McGovern Court. It is an amazing facility full of amazing people.”

The scheme was heavily decorated for the occasion, with Maria Free, Court Manager, adding: “Local MP Stephen McPartland was extremely personable and spent time talking to the residents; we look forward to him visiting again soon.” 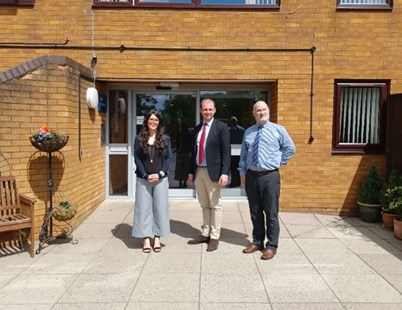 Over in Skegness, Miller Court residents enjoyed coffee and cake with Matt Warman, MP for Boston and Skegness, and chatted about the history of the town during a recent visit.

Mr Warman took the opportunity to have discussions in small groups with 18 of the scheme’s residents before enjoying a tour and chat with Richard Wheeldon, Head of Retirement Living North at Housing 21, Court Manager Debbie Camm Mitchell and Operations Manager Lorna Webber.

Mr Warman said “It was brilliant to visit Housing 21’s Retirement Living scheme in Skegness, a great opportunity to hear from their residents about their concerns locally and to learn more about the history of Miller Court.” 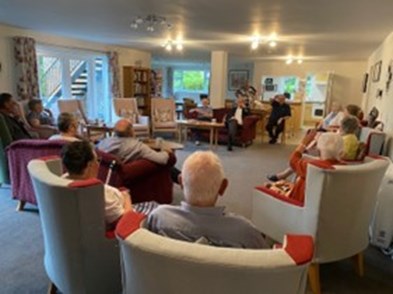 In Minster, Sir Roger Gale, MP for North Thanet, was greeted by residents at Rivers Court.

Court Manager, Clare Causton and Operations Manager, Anne Martin gave Sir Roger a tour around Rivers Court. Ms Causton said: “Sir Roger was quite impressed with the grounds and loved the gardens. We talked about the history of the court in that it was originally Royal British Legion before Housing 21 took over.”

Following this, Sir Roger Gale took the opportunity to have an informal discussion about local issues with some of the scheme’s residents.

Sir Roger Gale said: “It was a huge pleasure to visit River Court in Minster for the first time and to see for myself the splendid facilities that are enjoyed by residents of this scheme.”