Blog: From cakes to care work

As a career that can often feel overlooked and undervalued, 2020 has seen care workers become some of the most essential workers in the UK.

At the start of 2020 Khaleda Begam, 39, was running a successful cake business from her kitchen, but after years of caring for her four young children, of which the youngest was now nine, Khaleda was desperate for a change. As well as looking after a young family and running her own business, Khaleda was also caring for her mother and, though it could be challenging, it was this experience that led her to realise she had the compassion and empathy to turn her love for caring for others into a career.

"I’m able to leave work knowing that I have made a difference to someone’s day, which to me is so rewarding."

In February this year, Khaleda took the jump and started a new career as a Care Worker at Housing 21’s Goldfield Court in West Bromwich – an Extra Care scheme where residents live independently in their own apartments and care is available for those who need it. Although she started her role right at the start of the COVID-19 pandemic, Khaleda has loved every second of it.

Reflecting on her career change, Khaleda says: “Despite joining during difficult and unprecedented times, the team and support network at Housing 21 has been invaluable. Sadly, in June this year, my mum passed away. Despite only being in my new role a few months, the team here offered so much support and the job really kept me going. I’m able to leave work knowing that I have made a difference to someone’s day, which to me is so rewarding. One day you’re a friendly face to lift their spirits during a frightening time and the next you’re a confidant for the years’ worth of stories they have to share.

"I was given thorough training by my manager and assured about the possibility of progressing through roles to build a successful career..."

“Even though I had looked after my mother for years, I didn’t have any professional experience in care. This wasn’t an issue at Housing 21, I was given thorough training by my manager and assured about the possibility of progressing through roles to build a successful career in the industry - which is exactly what I plan on doing. People are often quick to dismiss Care Work as not being a career that offers progression but I’m hoping to start my NVQ and become an Assistant Care Manager in the future.”

When asked whether she would recommend a role at Housing 21, Khaleda revealed: “I already have! A friend of mine started at another of Housing 21’s Extra Care schemes six weeks ago and is enjoying it as much as I do. If you’re considering becoming a Care Worker, my advice is do it. You could be missing out on something you really love. If you’re a patient person, that understands people and doesn’t mind being an ear to support and listen this is the role for you.”

“Up until COVID-19, people didn’t realise the importance of Care Workers. Even the families of residents have remarked how impressed they are with the dedication of our team. We do a very important job and should be recognised for it.” 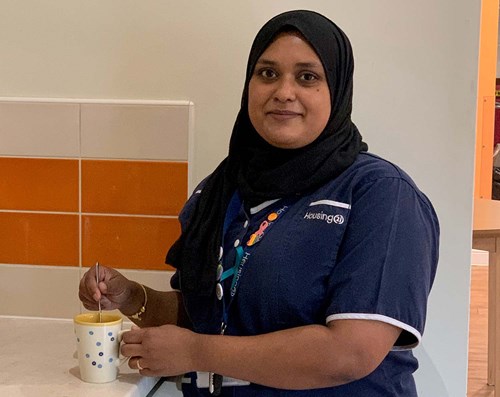