Two residents at Wallington Extra Care scheme, Dymond House, have been involved in a project with The University of Worcester to help people living with dementia. 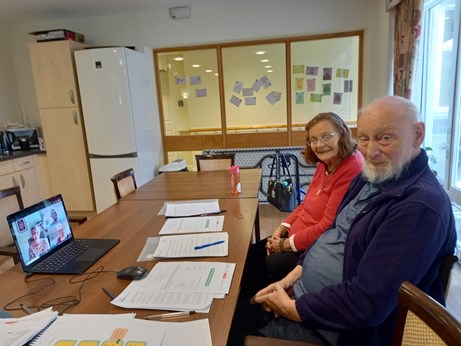 Image caption: Christine and Bill at the first virtual meeting of the
Advisory Group in September 2021.

Bill and Christine will be involved in the ‘DemECH project’ Advisory Group for 18 months, helping to explore how different models of Extra Care Housing promote and sustain wellbeing for people living with dementia.

Christine has been living at Dymond House for three and a half years and previously ran a pub and B&B with her late husband as well as volunteering as a Samaritan. She said: “I’m excited to be a member of the Advisory Group, it’s great that people like me are being given a voice – it feels like my ‘raison d'être’!”

Bill has been living at Dymond House for around three years. He previously worked as a librarian for UCL in London for many years and gained three Master’s degrees during this time. Bill also loved to travel and sail in his younger days. He is also excited to be involved in this project and being part of the Advisory Group.

Teresa Atkinson, Senior Research Fellow at the University of Worcester, said: “We know that Extra Care is becoming a more popular choice with older people, but little is known about how the different models of Extra Care housing supports people with dementia.

“The importance of this study lies in its focus on dementia. There have been many studies which consider how Extra Care housing works best for older adults, but very few of these mention people living with dementia. This is a real challenge because if we don’t know which models best support people with dementia, how can we be sure we are offering them the very best possible support, or the very best opportunities to enjoy quality of life? If we are truly person centred, then this is the information we need to commission and structure future care provision.

“Within this study, hearing the voices of people living with dementia is paramount. This research is being guided by Bill and Christine who are living the reality we seek to understand. As members of our Advisory Group, their expertise drives the research forward, scrutinising and contributing to the data collection design, analysis and findings.

“Bill and Christine will help us to deliver the findings from the study by sharing these at conference presentations. Involving Bill and Christine from beginning to end ensures our research is founded on the lived experiences of people with dementia.”